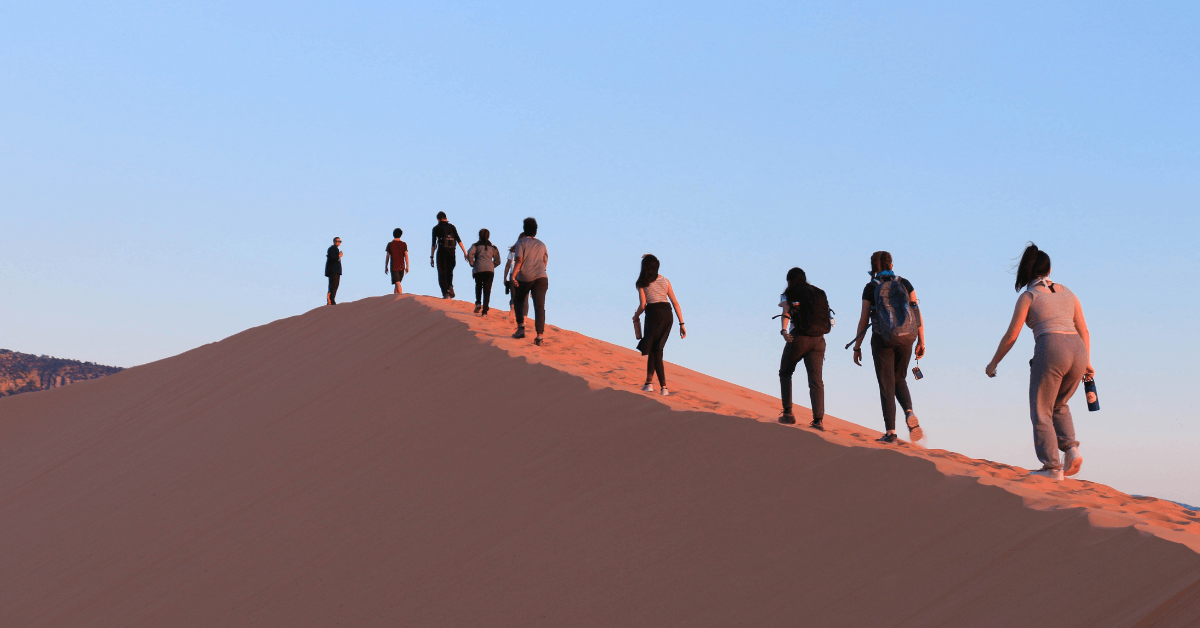 These desert survival team building exercises will strand your team in baking hot deserts and let them tame camels with bananas while they fight to survive.

And yeah, I know, getting stranded in a desert in real life would be terrible. But you cannot deny that there is something inherently fun about the situations in desert survival team building exercises and activities. With only a few resources to begin, the team members claw their way through intense environments in order to survive and eventually thrive despite everything.

Also, note that all the desert survival team building exercises I’ve highlighted below are based on over 2,000 actual cases in which people lived or died depending on their life-or-death decisions. So ensure you explain to the participants that every team’s survival depends on how well the groups can share their present knowledge and work toward a common goal.

Split the group into teams and explain that they’re the real people in the described survival situations. Also, use this opportunity to discuss the characteristics of a great team.

During the games, observe individuals who end up assuming leadership roles in each group and whether everyone puts their best foot forward. Some people tend to go along with the crowd in crises like these.

Better yet, feel free to relate the findings of these desert survival team building exercises to activities in the real world (such as the workplace.)

Set up the scenario as follows.

“It’s 2 pm on a Friday at the end of January. You and your teammates have just concluded a three-day training in Cairo, Egypt. You’re all aboard a chartered, twin-engine plane destined for Dakhla, Morocco.

At the beginning of the flight, the plane’s captain came on the overhead speakers and invited all of you to sit back and relax during the hours-long flight. Around two hours into the flight, the captain comes back on again and lets you all know that you’re currently flying over the Sahara Desert and weather reports indicate a temperature high of 115 degrees.

Approximately three hours into the flight, a loud blast is heard by everyone onboard, and the plane begins to nosedive. Over the next few minutes, the cabin starts losing pressure, and the only thing you can see outside the windows are miles upon miles of sand and some large boulders.

Once again, the captain comes on the speakers and lets you know that the plane’s engine has blown, and therefore, the aircraft will, without a doubt, crash. So you all prepare for the turbulent and possibly fatal crash land.

On the ground, all surviving crewmembers and passengers scramble to exit the plane before it explodes (which it does a few minutes later and is reduced to rubble.)

Except for one crewmember and the captain, you, your team, the co-captain, and one crewmember have all survived the crash. You now need to work together to survive the desert terrain and climate and get out alive.

Now, on your way off the plane, before it exploded, you were able to salvage the items below. Your objective is to rank the items in order of importance and develop a game-play to help you get out alive.

Here are additional details that should help you and your time craft a plan amidst this desert survival team building exercise.

Apart from sending a general mayday call, the pilot could not notify anyone of his position before the plane crashed. That said, ground sightings taken slightly before the crash suggested that you’re about 65 miles off-course from your originally filed flight plan. Also, several minutes before the crash, the captain indicated that the nearest known habitation in the vicinity is a mining camp 70 miles away in a northeast direction.

What’s more? The immediate area is quite barren except for the random shrubs. Even worse, everyone in your team is dressed in lightweight clothes, like leather shoes, socks, shorts, and short-sleeved shirts.

Everyone also carried a hat and a handkerchief, and in your collective pockets, you have a packet of cigarettes with a lighter, $650 in notes, $2.53 in loose change, and a ballpoint pen.

The Objective of This Desert Survival Team Building Exercise

As the tutor and game host, you should encourage the groups to complete the desert survival team building exercise without using tactics like trading in, voting, or averaging. Instead, set the aim for every team member to at least partly agree to each ranking on the final list.

Also, watch for participants who either change their minds simply to reach an agreement or avoid conflict. Highlight these types of behaviors in a debrief after the exercise. An essential outcome of this exercise can be teaching everyone that sometimes a bit of give or take is needed for groups to move forward toward a solution.

Also, watch for over-emphases on some participants’ part on needing 100 percent answers. After the activity, steer the groups toward the aim of the desert survival team building exercise, which is to heighten awareness of decision-making processes and communication rather than emphases on ‘getting everything correct.’

At the end of this guide, I’ll also include general desert survival rules and tips they can incorporate into their survival plans. These are also rules everyone should observe if they’re ever stuck in the unfortunate desert survival scenario.

To kick things up a notch, consider a desert survival team building exercise with steeper stakes. As you’ll see, the open-ended nature of this survival situation makes it flexible enough and suitable for people of all age groups.

So, like the first scenario, this example assumes the group’s aircraft has just crashed in a desert. Unfortunately, the last cupful of water onboard is spilled on the dry sand, so the group immediately scoops up the wet sand and puts it into a plastic bag.

The objective of this desert survival team building activity is to encourage the team members to use their knowledge of gases, liquids, and solids to decide how mixtures may be separated, including through condensing and evaporating.

The different groups have just 90 minutes before they die from dehydration, so they need to move fast and get the vital water back.

The following were the things available after the crash:

The desert environment should provide unlimited quantities of sand and a source of radiant energy. Provide a 60 W bulb, which will simulate the desert fun, but ensure you check and ensure that it’s safely wired and earthed.

Below is an example of an approach the teams can use to complete the desert survival team building exercise.

As a health and safety note, remember that my guidance regarding this desert survival team building exercise is incomplete. As such, you’ll need to be particularly vigilant and discourage the group from consuming the water they extract from the wet soil.

Ironically, one of the biggest threats in deserts is flash floods. Canyons, arroyos, and ditches can fill quickly with floods and cover you before you even get the opportunity to process what’s happening. Here is what’s even scarier: Drownings kill more people than dehydration in the desert.

So it’s safe to say it’ll be in your best interest to keep high grounds and avoid places that could spell doom amidst torrential downpours.

2. Keep Your Clothes On

With the sun beating down on you, it may seem like a great idea to start taking off your clothes. I’m glad you’ve found this guide so I could pass it by that-that could be disastrous. Exposing your skin in a desert will not only hasten dehydration but also lead to sunburns.

Instead, you’ll need to cover as much as possible and keep your skin away from direct heat.

3. Stay Off The Ground

While exhaustion may trick you into lying down on the ground, you should actually avoid it as much as possible. Desert grounds can get up to 30 degrees hotter than the air, so ensure you always make yourself a cushion you can sit on.

If you’re stranded with a car, take out the seats and place them on the ground under a shade.

Rather than seeking sustenance in the form of plants or meat, you’re better off staying where you are and not eating at all in most scenarios. Why? Well, the energy you’d waste hunting is way more valuable than the food, particularly if you’re not a skilled hunter.

Even worse, exposing yourself dehydrates you faster. And remember, average human beings can last up to three weeks without eating, but not remotely as long when dehydrated.

A myth has been circulating for decades now claiming that you can safely drink the water inside a cactus and survive in the desert. In reality, doing so may just be the thing that kills you faster. The water contained in most cacti isn’t pure enough for the body to consume and may actually be toxic to the human body.